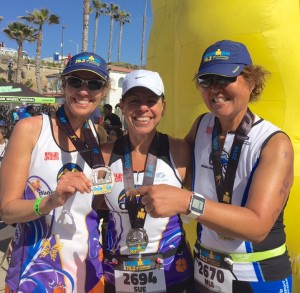 The glow afterwards, the emotions throughout, the training with friends, Kristin for cheering and giving us strength, encouragement from dmc and friends, and the coaching from Patricia LaSalle will be what I remember from my first 70.3. For Johnna and Sue, this was yet another endurance race to line up next to their multiple Ironman and Half Ironman finisher medals.

Sue got us a great timeshare apartment (Wyndam Resorts) right at the athlete’s village and finish which is about a mile from the start and transition area. We had a two bedroom apartment with a kitchen and two baths. Thank you to Sue for taking care of this. Thank you to Kim Cooke for the recommendation.

The weekend starts on Friday with registration, shopping for Ironman logo stuff (Sue also got some cool Rudy glasses). Mayor Sue bumps into a friend and made many friends at the race. We then went to the noon athlete briefing session. Learned about the route, the penalties for drafting (have 25 seconds to pass someone 6 bike lengths ahead of you), blocking, passing on the right, passing in no pass zones and one area that the speed was limited to 25 mph. Johnna was listening closely on how this would be detected. They have monitors at the beginning and at the end of this zone and time each rider.

We put our numbers on our bikes and headed to transition to check them in. So many beautiful “wheels” mounted on the racks. Kristin and I calculated that there was at least $6 million of bikes alone resting for the day ahead. 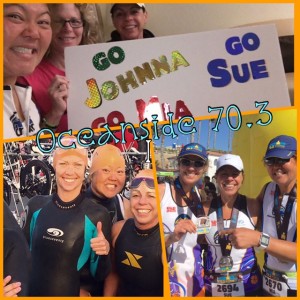 The anticipation of unexpected weather conditions drives some of the anxiety level. Apparently it was so windy on Thursday; a rider was blown on to the street. James (Johnna’s husband and most likely to be the 1st male dmc Team member when dmc opens up to include men) provided calming assurances about conditions and bikes. I also ran through some of the questions that Jaimee (Johnna’s daughter who also raced) share with me – like what if I lose my nutrition, what if I get a flat, what if no goggles, what if, what if, what if…

Lots of great restaurants are in the vicinity and neighboring Carlsbad. Mexican, Italian, burgers and BEER places so don’t have to worry.

Holy moly, race day starts at 4 am with breakfast. We catch a shuttle shortly after 5 am with our gear just across the street from the Wyndam to take us to the transition and start. We are dropped off about a half mile away. It is 40-50 degrees, but of a chilly wait. We setup our stuff under our bikes (18 inches, 8 bikes to a rack), go to the restroom and get body marked. We waited for almost two hours to start. Sue and I worried about Johnna not being there because usually she’s early. Turns out she planned to be in transition at 6 am. 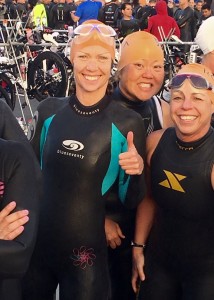 The three of us are the third to the last wave to start, 7:29 am. Sue goes to the restroom one last time with her wetsuit half on. Not sure how she managed that. We then line up in the chute and then we begin to see the first wave people run past us as they have finished their swim. They were running at a pretty good pace. The two at the front were keeping up with each other.

Meanwhile James finds Johnna and gives her the best wetsuit lift before zipping her up. Watching people get into their wetsuits is entertaining.

The swim starts at a boat ramp. The water felt relatively warm compared to the outside temperature. We have five minutes to get to the starting buoy and then the horn starts. Lots of splashing, kicking and arms moving – so I decided to wait a bit. It’s relatively easy to site because we are swimming between the boats in the harbor. As we make the turn, as Patricia warned, we begin to feel the swells and some choppiness. I enjoyed finding the different balance but I also found the people in the wave behind me catching up and bumping me, etc. Note to self, stay away from the buoys. Making the turn back into the harbor is a nice feeling because it’s almost over. A bunch of volunteers are standing at the boat ramp almost grabbing people out of the water I think to see if we are ok. Walk/jog out of the fairly long chute to the transition area where most of the bikes have already left. It was so heartwarming to hear Kristin calling my name, ringing a cowbell and holding up her GO sign.

Sue’s bike was gone as I ran past her area. So happy to feel the warmth of the sun and not worry about having to wear a jacket to stay warm. Heeded Sue’s advice to not bend over to avoid falling from dizziness. As I was putting on my shoes, I heard Johnna say go Mia. Saw a guy fall in transition so I carefully jogged my bike to the bike out sign. I got on my bike and started rolling into lots of other bikes thinking I would bang into one of them but didn’t. Ha! Started pedaling and then I heard Kristin calling my name again! Still puts a smile on my face. 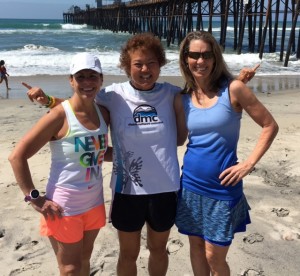 Heading north, within the 2nd mile, Johnna passed me. I saw her again on a short out and back and then that was it. The outbound route is along the 5 with beautiful ocean views and air. After that there’s a turn on to the Camp Pendleton Base which reminds me a little like riding Tassajara except that there are tanks and loud cannon noises.   About mile 22 or 23, the climbing begins from basically sea level to maybe 750 feet (nothing compared to what the double century and death riders are used to) but it is up and down (fun) for a total of 2,150 feet. There are 3 steep hills which I made up without walking – saw some people walking.

Last 10 miles had a pretty good headwind. Near the bike in, Kristin was there cheering. She was across from an 11/12 year old who was also encouraging every rider and runner. Another super happy moment.

Course was well marked for holes and bumps. Volunteers warned us of obstacles and the course was easy to follow.

Kristin was there at the start the run. It’s two loops – some athletes were making their turn for the second loop and I could hear, “water, water”. The run heads south along the strand/ocean. Johnna was finishing her first loop. Was feeling good and thinking about what to do during the first 5 miles. I wanted to negative split the last 8 (btw that didn’t happen). By mile 3, I started to feel 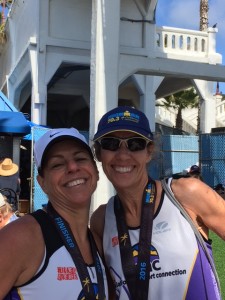 dizzy – maybe hyperventilating or dehydrated, not sure. So many things come and go through one’s mind – enjoy vs. push. At one point I felt thirsty, at another I could only think one foot at a time, at another felt my chest was tight, at another threw out the Gu. I saw Sue at my mile 6, her mile 8. She gave me a big hug- perhaps as delirious as me? Somehow made it to mile 12 and decided to run it in. YAY, and then the finish – Johnna, Sue and Kristin saying “you did it, you did it”. Nice. And then I felt ill – nauseous and having hard time breathing. However, I felt surrounded by support – had my recovery drink, Sue and Johnna encouraging me to eat stuff and Kristin went to get my bike and stuff at the transition. Within a few hours I was feeling better, enough so that we went out to get a beer and real food.

An amazing experience that I will remember for a long time. I think I want to try again. Having friends and dmc support with shout outs, texts, emails, Facebook made it a richer experience. Thank you very much. I’m grateful and proud to be an Ironman! 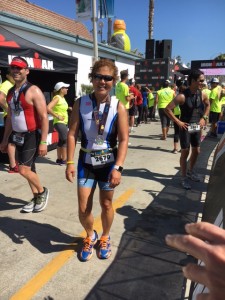 Got cleaned up and went to Bagby Beer – it looks like Drake’s Dealership in Oakland with lots on tap and very good cocktails – Kristin had a beautiful mojito and Sue and I had beers. We had to wait a long time for dinner but the drinks were PDG and so was the company!  Finished the evening at Cold Stone Creamery with some yummy concoctions.

Went to Beach Break Café on Sunday morning for breakfast before our drive home. We had a very short wait, but when we finished around 9:30 am they had a lobby full of people waiting. 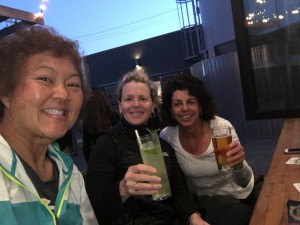 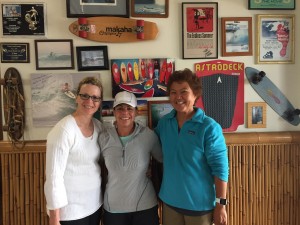 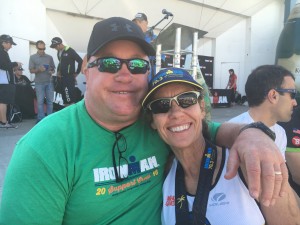