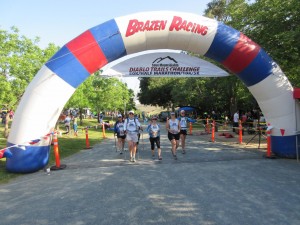 I had no intentions of running this race but the night before I decided to run since our team sponsors Mt Diablo and I wanted to help.

Got up early went to Castle Rock park. I was warmly greeted by teammates from DMC and Clubsport which was great. We took photos and all was fun.

I have not run this race before and some of gals decided to hike the 10k and left early. When I saw that they had left, I went too, crossed the entrance and took off on my merrily little way. After the the first mile we turn up a hill and up and up and up. I began to have negative thoughts such as “What was I thinking”, wearing long capris’ no 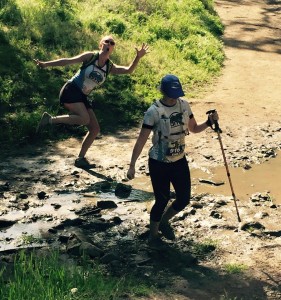 water. And then I thought “What the f__k am I doing!!” Got to the top and then saw the DMC girls. I belted out my thoughts and they replied, “but look at the beauty!”. No sympathy from these “multi-sport nuts”!. I continued on and then saw the most beautiful view of CC that literally took my breath away. OK, it was beautful and I continued on the run beginning to enjoy the run. We got to another hill and the guy next to me said, 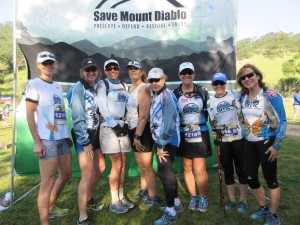 “This is walker’s hill”. I thought, Oh yea, not me, I’m running and kept on until it got really steep and sure enought, I walked up the hill. It was VERY steep. OK, kept going and again was enjoying the run, even keeping my feet dry. A gal came by, apologized to the crowd and dropped trou right there to relieve herself. Boy, I really don’t know much about trail running. Kept going and about mile 4 hit the water again. All were sailing through it NOT around it so I jumped in and ran the rest of the race enjoying the water. Marie. the Coach from Clubsport said before the race that she was excited about running in the water. I was thinking that she might have been high or something. It was cool in the water and felt good and yea, it was fun.

As I got near the end I began to realize that I did not see any other women close to my age except in the 5k. Maybe I should check the results. I just checked and sure enough, me, little, chubby me, came in first in my age group. Way to go Me.
Happy Trails.
With love,
Judi